To learn by practise

Three new pilot set-ups followed from both research and development.

This test set-up is primarily aimed at conducting ecological research into the effects of the sun on water. In order to be able to study the effect of the sun on water, we are realizing a large-scale test set-up (approximately 40 meters in diameter). Because virtually no knowledge is known about the effects (which and when they occur) as a result of sun on water, we use the test set-up to explore these limits. The test set-up therefore has a variable coverage. We start with a coverage of about 50%. Depending on the results, we increase the coverage to 75% or higher. In this way we want to gain insight into what effect which cover has on aquatic ecology. In addition, we also look at whether covering waters has an effect on the emission of greenhouse gases from waters.
With the test set-up, we are also investigating how effects on ecology can be mitigated or prevented. To do this, we mainly look for smart solutions that make a positive contribution to both the ecology and the economy.

– Sun tracking. It follows from the first pilot that a sun-following sun on a water system can significantly increase the energy yield. This helps to arrive at a positive business case. Because the set-up only has a 50% coverage, it was decided to arrange the open parts in the system as so-called skylights. As a result of the rotational movement of the field, these skylights prevent continuous shadowing under the field. As a result, negative effects on ecology as a result of reduced light incidence can be mitigated.

– Field movement. Being able to move a floating system follows from the first pilot in which the system had to be moved so that regular management and maintenance of the water board would not be hindered by this. We are going big with the test set-up. The entire test set-up can be moved over the water to a completely new location. As a result, the arrangement does not hinder the regular maintenance of the water board, but it also offers the possibility with which aquatic ecology can recover. This follows the principle of so-called rotational cultivation, whereby we can adjust the frequency of the movement depending on the effects and the speed at which they occur. This solution is also aimed at preventing a continuous pressure on marine life as a result of covering an open water system.

– Drive. In order to be able to run and move the test set-up, we opted for a drive with (electric) motors. We expect this to have a positive effect on ecology as it mixes water below the field with water that is not covered by the floating setup. The (active) mixing of water can mitigate the loss of wind and wave action by covering waters and therefore has a positive effect on ecology

– Look through. Potentially, this test set-up can be seen as a first possibility of a completely autonomous floating sun on water system. A system that (continuously) autonomously follows the sun and moves over an available area of a water surface, so that no negative effects on ecology occur.

This test set-up is aimed at reducing costs. It follows from the first pilot that the sun on water systems is sensitive to wind action. Although the number of storms in the Netherlands is relatively limited, systems on the water must meet wind load standards. This means that sun on water systems are often heavy and/or over-dimensioned. The most obvious cost reduction therefore lies in saving on construction costs.
The test set-up developed for this purpose is unique. It is the world’s first sun on water system that avoids wind load by temporarily sinking underwater. Above wind force 6, the entire system automatically sinks under water. As a result, wind load and thus construction costs and damage to the system are literally avoided. As soon as the weather conditions are favorable again, the system will automatically surface. This test setup is so revolutionary that research and development is primarily focused on proof of principle. After that, this test set-up will be further developed for efficiency.
see through. The test setup is so revolutionary that we are realizing a separate test setup for it. However, we expect that if successful we will be able to translate this technique relatively easily into large-scale application as in pilot 1. In connection with the height of the construction itself and the available water depth, sinking an arrangement in deep water is relatively simpler than in shallow water.

In this test set-up we are investigating the possibilities of applying biobased material. We have chosen to use bamboo composite. In this pilot, we are using bamboo composite for the first time for parts of a floating structure. The possibility of using these types of materials is closely related to the development towards a lightweight construction that is possible when wind loads can be avoided. This pilot is therefore closely related to pilot 2. With this test set-up we mainly look at how resistant the material is in the transition environment between air and water. 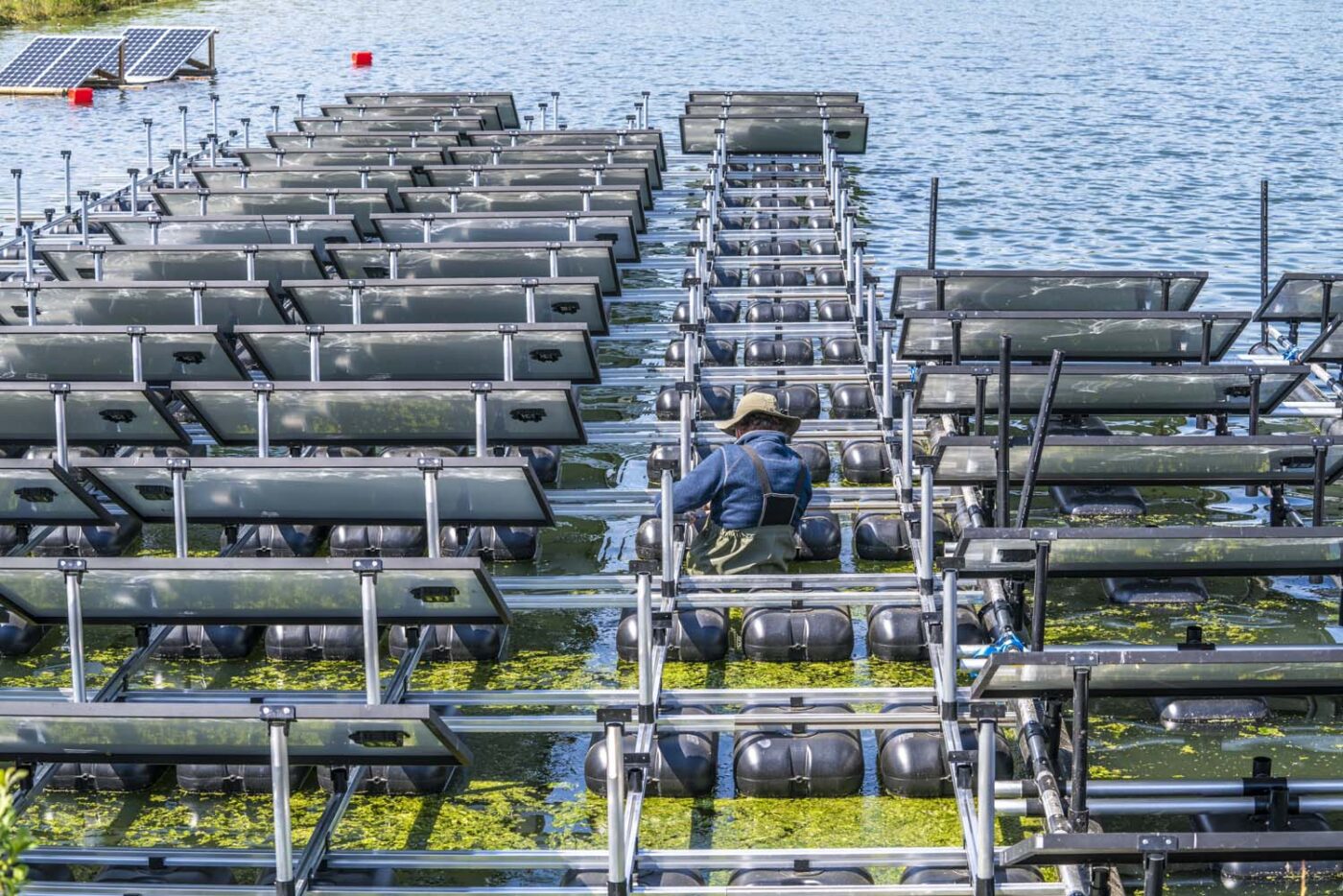